I opted to ride Beamer instead of leading him for our next outing. Ted led Moondance while I rode- my first ride of the year… yay! Because of Beamer's knee I can only do short rides on him, but I treasure every ride. 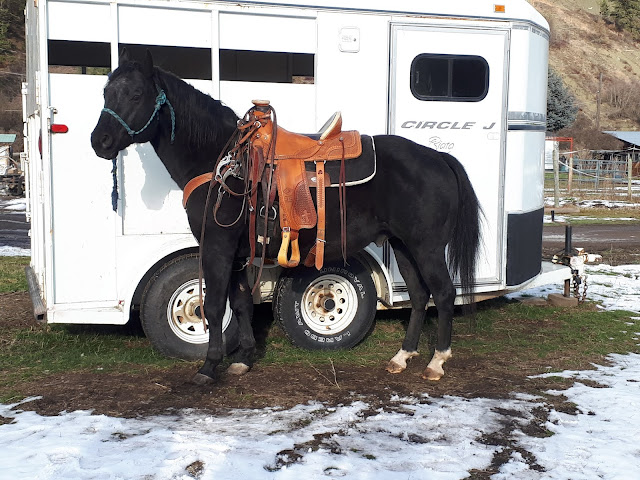 Moondance did fairly well for Ted, but did get a little rambunctious so we opted to take him to the round pen where Ted worked him for a few minutes, long enough for him to start paying attention instead of thinking it was all play time.
So for our next outing I decided that Moondance needs to get handled a bunch more before going for walks again. So he got round pen worked today. 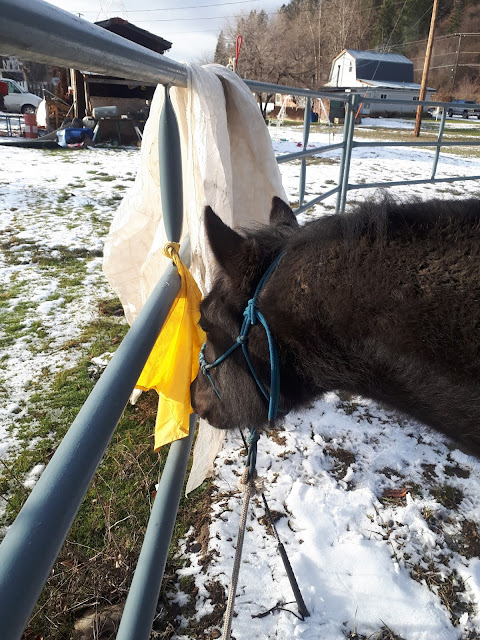 He had to inspect my tools- a flag stick, which he promptly tried to eat, and a big ole raggy tarp I reserve for schooling colts.
I worked on getting him to go forward around me by opening my lead hand and cuing him at the girth area with my stick, and as soon as he moved a foot forward I gave a release of the cues. He caught on pretty quickly and soon was circling me- although he did get a little... ahem...exuberant a few times!
To ask for the stop I bent a bit and looked at the hip, moving the stick to point at the hip, and he very easily caught on that he could move his hip away and face me. Once I had him going nicely both ways and stopping when asked, we moved on to tarp work.
I like to get them following scary things first, it makes them much less scary and they get quite brave, as you will see:
Everything goes in the mouth.... eye roll...
I flapped it around him, and started rubbing him with it using the approach and retreat method; namely approach it towards his body and retreat with it before he moved away from it. Within minutes, 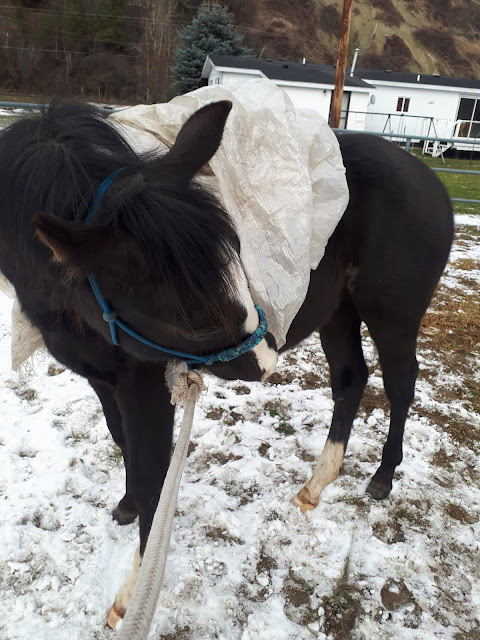 he was wearing it.
After that I folded it up to about the size of a saddle pad and laid it across his back, then slid it off his rump, from both sides. He was better when I was on his left than right, but allowed it to slide down behind him without moving.
I finished the session with a review of the longeing- a couple of half circles and hip yields each way to make sure we had that down pat, and that was it! He was a very good boy. He is quite proud of himself when he figures things out and laps up the praise I give him.
A few of these short sessions and introducing more sacking out items and obstacles will keep his mind occupied, and should make it easier to take him on walks.
Posted by Shirley at 7:07 PM

Awesome! Such a delight for me to observe your training this way.

Beamer looks content to be saddled up and ready for an adventure. So great that Ted is interacting with Moondance. It's good for horses to have different handlers, especially the young ones. Love your training posts!! You do such a nice job of explaining the how & why.

Oh my, he doesn’t have a bit of fear! That is crazy!! I think Moondance is ready for the trails!!

Linda I did a lot of ponyimg him from Gussie over the summer. He is good to pony and loves getting out and seeing things. His only issue is the steep banks, but we are working on that.

Yay for the first ride! Do you have a goal for rides this year? (number of rides, number of hours, new things, etc)

cdn- no riding goals set this year as I expect a lot of my time will be spent schooling Moondance in groundwork and I have 2 foals due to hit the ground in May, so I spend lots of time with them. I will ride as much as I can though!

Smart guy, as all your foals have been!

What a good boy:) All your work with every foal you raise is so worth it...what a great foundation!!