The other day, when I was asking Moondance to come into the barn he had his usual Idon'twanna attitude; when I backed him up to regroup he got downright rude, rearing and pawing - so we had a Come To Jesus meeting with the help of my dressage whip - no I didn't beat him up or whip him into submission! What I did was calmly strike him on his front legs below the knee when he was in the air-  and then stand at his shoulder and ask him again to come forward; when he balked I reached back behind me (so he couldn't see the whip) and tapped him on the butt. It took three times and then he decided he would much rather be in the barn munching on his barley. The next day, he figured he would go see daddy instead of stepping in the barn and got told no ; one tap on the hip and he stepped in and then backed out, 2 more tries and in he went. Yesterday- only 2 taps. Hopefully today he will just walk in like a good boy! Them young'uns do like to test their boundaries.  With young stallions you do have to be vigilant that their childish behaviour doesn't become ingrained and make them dangerous as adult horses. He has to be respectful of his handler but not fearful; a fearful horse can be dangerous. Another area where he is being asked to mind his manners is when I am in the pen cleaning their shelter or putting hay out. Usually a vocal command- a HEY! or a growl will get him to back off out of my personal space; and here one has to be careful not to turn it into a game that colts would play.
Speaking of play, he was feeling pretty good yesterday, so of course I had to video it!
Both Jayne and Belle have had about enough of his antics; they are doing a good job of telling him off.
I haven't had him out in the round pen for a few days, but I did load him in the horse trailer just as a reminder the other day. 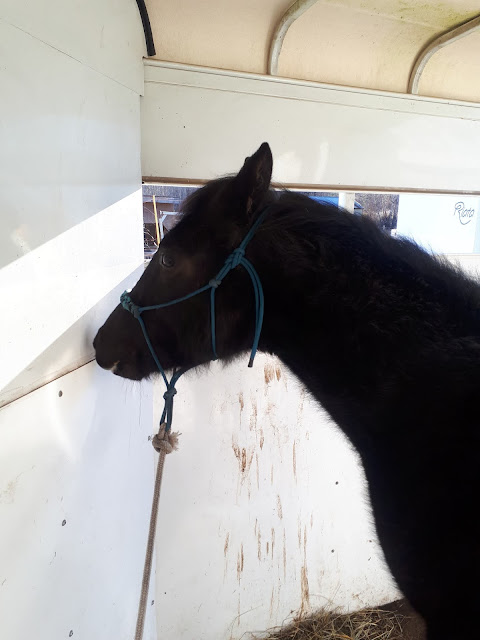 Didn't he just walk right in without hesitating! Silly boy.
The mares are looking pregnant, both are due in May. 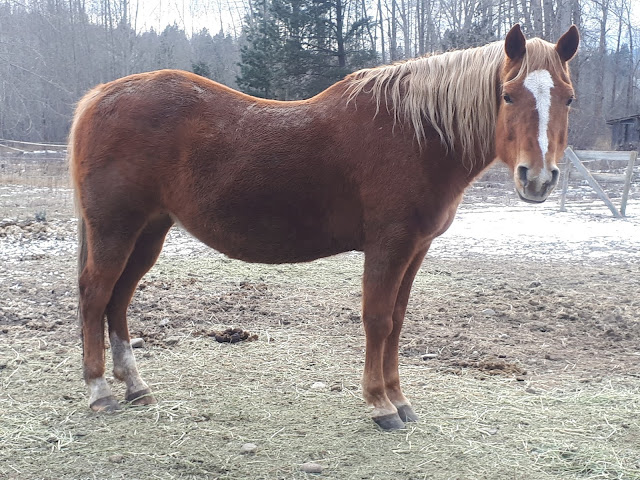 Pretty excited for this one, hopefully my keeper filly!
That isn't a sagging topline on Jayne, it's just the way the mud on her back follows the contour and makes it look like her spine is sticking up. She is actually in great shape. 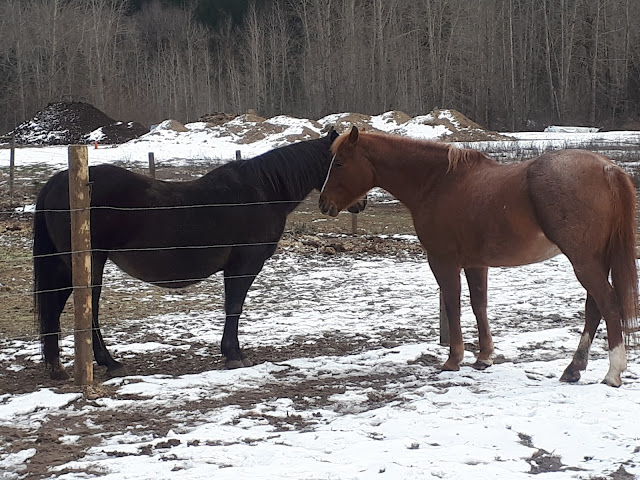 Belle has her usual big belly, and as you can see by comparison, it is pretty obvious that Gussie is not in foal to Drifter. She may have caught originally but probably absorbed it due to complications from her fecal water syndrome contaminating her vaginal tract.
With snow in the forecast for most of the week, I will have to pick my days for working Moondance. I think it's time to hand walk him again, just he and I to get him thinking less about himself and more about just going forward. I don't want to pony him from Gussie at this time as I suspect he is quite hormonal with this weather that is more like March than January; bare lawn and trees budding is not what I expect in January!
With colts especially, every time you handle them you are training them, so no day is lost.
Posted by Shirley at 9:32 AM

It's a weird winter. The Canada Geese have stayed in our area--lots of them. Highly unusual. Everything is budding out. I wonder if it means we won't have a deep winter.

So, Cowgirl is due in Late May, early June, and she doesn't look super pregnant. I mean, she's getting round, but it's not like Belle. I hope everything is still going okay for her. She got really, really defensive with the herd last week--which I took to mean she is getting that mama defensiveness. It was crazy. I could barely lead her to the turnout, and she's never like that.

I remember when Tumbleweed started to rear up in spring of his 1st year. I had to be super fast to get to his side and pull him down and whack him. Afterhe was gelded, it all disappeared instantly. The hormones really rev them up!

Oh Moondance, good thing he has you to help him figure out how to be a well behaved boy. For some reason I thought you wanted a filly out of Belle. Regardless, I sure do hope you get your beautiful dream filly!

Linda- first time mares don't usually get really big until the last couple of months and they typically have a smaller birth weight foal. Belle is on foal #11 so she earned that big belly! Jayne is on foal #7.
Aurora- since I plan on keeping Moondance, I don't need a filly from Belle; in fact I am really leaning towards keeping whatever Jayne throws for me because there is no way it's going to turn out to be the size of Belle/Beamer babies who all mature at least 15.3 hh (except Sparkle, her first foal, who ended u being just under 15 hh- see my comment to Linda). I expect Jayne's foal to be less than 15 hh, which is what I want. Those tall horses are getting harder to get on the older I get! I am actually hoping for a nice sorrel filly but whatever she throws I will be happy.

Thanks. That’s good to know.

What a pretty boy! The girls are looking good. Hope you get your filly:) How is Tess? You have not mentioned her recently...I was thinking about her:)