The integration is going well.
I watched them for a while; but other than the occasional yell from Beamer, they settled in quite well. At first, Jayne walked away and pretended to ignore him, while he made a quick tour of the pen to sniff piles. 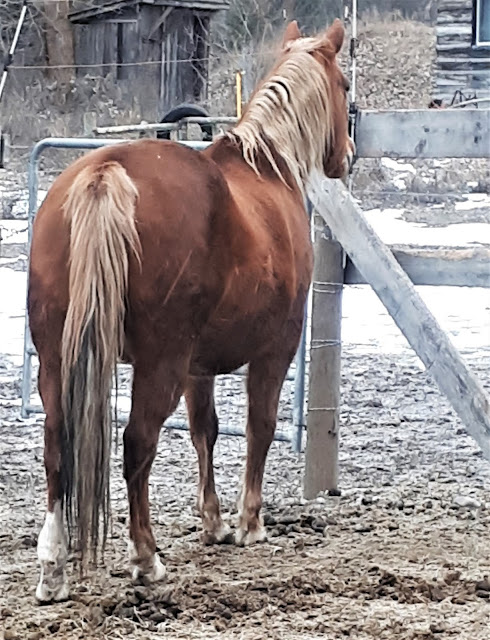 I watched for a while then left them alone and checked later in the day. 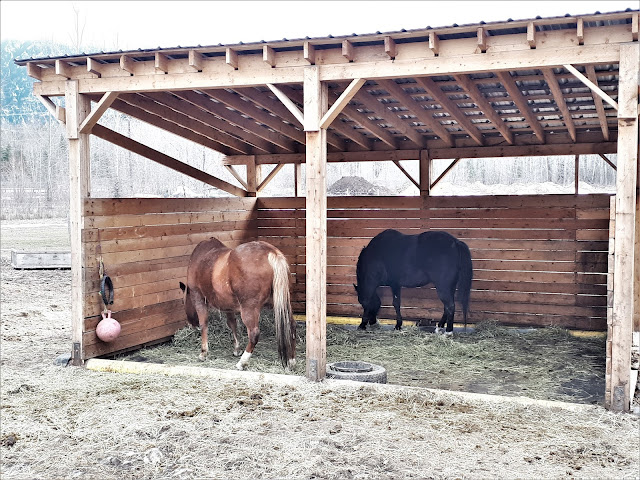 Looking like an old married couple! My concern was that one or other of them would boss the other out of the shelter, especially with rain in the forecast, but I needn't have worried. So tonight will be the last time to separate them at night; starting tomorrow they can be together 24/7, at least until Jayne is within a couple of weeks of foaling, then she can live in the foaling pen until foaling and I can halter the foal. I will keep Jayne and Beamer separate until the foal is a month old and then try having them all together. I have no idea how Jayne is as a mama, so I don't know if she will tolerate him in the same pen as her baby, so that will be interesting. If necessary I can keep them separate until weaning. Jayne will be bred back to Beamer on her foal heat, which makes it easier for me to check her back at 1 month; then if she is caught in foal it will be ok to let her back with Beamer, as she won't tolerate studly behaviour from him.
Posted by Shirley at 2:20 PM

Beamer sure has a lot to say. Glad it is working out for all of you. Mixed herds are ideal.

It is sweet to have them together like a married couple. In the wild he’d be with her, protecting his family. Now he can do it there and you get the fun of seeing it. Good for Beamer.

Glad it will work out! I am anxious for the foal arrival too...she will be amazing! :)